Okay everybody, get out your map of Michigan! You do have one, don't you? Most of us carry a Michigan map with us at all times. Hold up your right hand, palm toward your face, fingers together with your thumb spread away. Now take your left hand, palm toward you, and place it at a 90 degree angle so that your ring fingers are touching, your three middle fingers are together, pinky and thumb slightly spread, your left hand makes your upper peninsula (u.p. or yoopie). Never leave out the u.p. when considering Michigan. 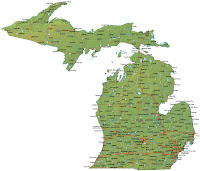 My trips to Michigan have always been on my to or from visiting my cousins in Wisconsin, but I have driven across it in both the left hand right hands. We stayed several days in Grand Rapids a few years ago while visiting friends who live in the Heritage Hill neighborhood. Heritage Hill was scheduled to be bulldozed in the 1960s. The once lovely Victorian homes had become brothels and drug houses. Instead, of being razed, though, the homes were sold for a penny each and were restored by the new owners. (Baltimore, Maryland would use this same idea in the 1980s to revitalize the downtown row houses.) Among all the Victorian homes, there was also one Frank Lloyd Wright house, the Meyer May house. We toured the Meyer May house when we were there. It was restored by Steelcase in the 1980s and admission is free. To find Grand Rapids on your map - start between your right pinkie and ring finger and come straight down to about halfway between where they web together and your wrist.


At about the time that the Meyer May house was constructed (1908-1909), the entire town town of Metz, Michigan was destroyed. Engulfed in a flames following an extremely dry summer, the entire town was burned down in a day, October 15, 1908. Forty-three people lost their lives. The story of the fire, and its aftermath is told in the book Devil in the North Woods by Walt Sheil. Based on oral histories, family stories and newspaper accounts Sheil tells the story of ten-year old Henry Hardies, whose mother and three sisters were among those killed in the flames. The book includes some photographs of the town, before and after the tragedy. Sheil is an expert storyteller; this book was a true page-turner. Through the stories of the victims the reader gains an understanding of the historic time period, and the lives of the farmers and merchants whose world was transformed following the fire. To find Metz on your map, look just below the spot where the tip of your right index finger meets the middle finger.

The film Roger & Me was Michael Moore's directorial debut. Made in 1990, it tells the story of Flint, Michigan, before and after the GM plant closings. The "Roger" from the title is then GM president, Roger Smith, whom Moore tries to corner throughout the movie in order to ask him about the folks in Flint who have lost their jobs. Along the way he talks to some of those who were put out of work, and others who remain optimistic about Flint's economic prospects even as business after business gets boarded up. He watches as families are evicted and finds out what others are doing in order to stay in their homes. The "pets or meat" lady is a character not to be forgotten. This movie is classic Michael Moore. We drove through Flint on our way to Grand Rapids. It has only gotten worse since the making of the movie. We did stop and buy gas there, figuring it was the least we could do. In fact there were virtually no other places to spend our money there. Our daughter, who must have been about eight at the time, commented that she had never seen a cashier at a gas station who had glass between him and the customer. To find Flint on your map just come straight over from Grand Rapids, to the spot below where your thumb and index finger make a U.

Our meal today is a favorite of the upper peninsula - the pasty. That's pronounced with a short "a" as in cat, do not confuse it with another edible spelled the same way, but pronounced with a long "a". Pasties are crusts filled with meats and vegetables - sort of an individual pot pie. Those who are familiar with Latin American food might liken them to an empanada. We modified the recipes we found a bit. They are heavy on beef and venison, and we do not each much red meat. Paloma does not eat any meat at all. James and I had ground turkey in ours, and Paloma had a strictly vegetarian version. They were quite tasty. We first learned about pasties when traveling through the U.P. around the turn of the 21st century. We kept seeing signs for them, but didn't try any. When I arrived in Wisconsin I asked my cousin about them. She only knew what they were because her friend Denise had grown up on the U.P. Denise served me the first pasty I ever ate last summer.

We have only been the U.P. once, and it was in the summer. It was quite lovely. I know enough about geography and climate to have talked James out of applying for a job there. I don't think I could handle so much winter.

Other significant events in U.S. history for today's date are:
1861 Louisiana left the Union
1870 Virginia rejoined the Union
Posted by YearofBooks at 5:59 PM