Montana - Alas, yet another state I have not been to. I am pretty sure I knew someone in library school who was from there, though. I have this feeling that I might like the "big sky" and the wide spaces. James has been there and will write a separate post about his trip, as well as some Montana pop-culture references that are near and dear to his heart.

Montana Justice: Power, Punishment & the Penitentiary by Keith Edgerton appealed to me mostly because it was slim, and I only had to go up one flight of stairs from my office to get it since it was available in "my library". This history of prisons in Montana begins with the stories of J.A. Slade and George Dixon. Slade was the victim of early vigilatism in the Montana territory - lynched for not much more than public drunkeness. Dixon, a freed slave, became one of the first inmates of the federal penitentiary in Deer Lodge on a trumped up murder charge. He narrowly escaped a lynching, ironcially, by confessing to a crime he did not commit. The book tells the story of the Deer Lodge peniteniary, its prisoners, staff and wardens. Once the need for the penitentiary was clear, it was built, but not funded, for staff. Anecdotes tell of inmates chained to the sheriff's bed at night because there was no place to house them. Cover pictures show a turreted building, and a before and after picture of an inmate - one in street clothes with a thick head of hair, the other in sterotypical striped prison garb and a shaved head. One can almost believe from the position of the inmate that one is a "photoshopped" version of the other. One chapter of the book profiles warden Frank Conley whose corrupt practices would be the envy of some of today's politicians. Corruption sure is nothing new. The final chapter is a "tough on crime" chapter with history of the 20th century through the present.  The depictions of solitary confinement, substandard food, and straw bed furnishings do a superb job leading up to the final chapter. It is true, though, that even here in east coast, pointy-headed intellectual New England no sheriff can get elected without a "tough on crime" stance. This book includes one mention of a prison library! 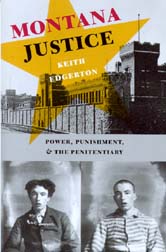 A River Runs Through It
I watched this movie for the third time. This is the truly magnificent story of brothers Norman and Paul Maclean growing up in Montana with their mother and minister father. Norman is down-to-earth, and rather cerebral, while Paul, the younger brother, is more of a rebel. A love of fly fishing is what binds the brothers together. James and I are especially drawn to this movie because it reminds us so much of James and his brother - preachers kids who grew up in rural Virginia, one of whom (James) left home to become a professor, and the other (Bob) staying close to home. The music and scenery in this movie are both majestic and soothing. ﻿The sheer perfection of this film made me cry.
After watching the film, I couldn't resist this Montana Trout recipe, although I wasn't at all sure I would be able to get trout. James took the request to a local fish market Fresh Catch and the fishmonger assured him that Steelhead Salmon was somehow related to trout. According to sources I found it appears to be a rainbow trout. Anyway, the meal turned out to be sublime. I do love salmon - such a rich flavor. It felt like a holiday, but I guess it is!
Posted by YearofBooks at 4:36 PM