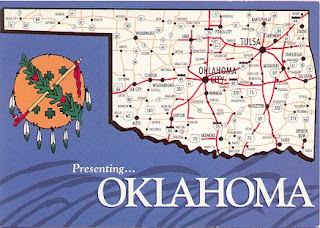 I have been to Oklahoma twice. The first time I flew there, to Lawton, somewhere in the middle of the state, in May of 1985 to visit a boyfriend who was stationed at Ft. Sill. It was very hot and humid during my three-day visit.  I asked him why there was no air conditioning in his dorm. He told me that the army wouldn't turn it on until there were three days in a row of 90 degree heat combined with 90 percent humidity, and then he set me up in an air conditioned hotel, since he wasn't supposed to have guests in his dorm anyway. We escaped some of the heat by driving up to Mt. Scott, one of two mountains in the area, the other, a bit smaller was called Scott's boy. When I returned to Maryland my boyfriend told me they turned on the air conditioning right after I left, and I realized I was there for the three days in a row of 90 degree heat combined with 90 percent humidity. It was also on that trip that I learned that bartenders do not know about, or care about, your attainment day. You will not be served alcohol before midnight of your 21st birthday. 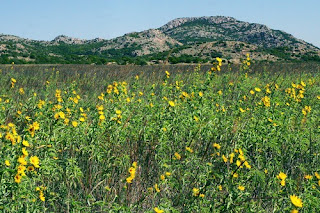 Mt. Scott
My only other trip to Oklahoma was driving through the panhandle on my way to moving to Arizona from Ohio.

An Oklahoma I had Never Seen Before by Davis D. Joyce
This collection of essays was inspired by Howard Zinn's A People's History of the United States and explores some aspects of Oklahoma history that some might prefer to forget, or perhaps not think about at all. An exploration of Oklahoma's commonalities with southern states focus, not on a gentile lifestyle, but rather a look at racial segregation. Racism against American Indians also ran deep. Other themes include pacifism, domestic abuse, abortion, the gay liberation movement and unions. I was especially intrigued with the deep socialist history of the state, which several of the essays treated, including "The Road Once Taken: Socialist Medicine in Southwestern Oklahoma" by Alana Hughes. Where we see the roots of of the American Medical Association's campaign against "socialized medicine". We know that everytime there is any mention of health care reform the AMA will drag the same old argument out, and convince the general population that we just can't have it.

Some of the essays in this book were more personal, others were written by history scholars. I found the former to be much more "readable" and interesting. The one "library" reference I noticed came in the very last essay: "Even Among the Sooners, There Are More Important Things than Football" by Alan Ehrenhalt. Ehrenhalt explores the history of public higher education in Oklahoma. The "Sooner" state created a very large network of colleges and universities with virtually no admission standards, and low tuition, in order that all could have a chance to go to college. While OU's football team became a source of state pride academic standards languished causing Representative Carolyn Thompson to say "[w]e prioritized where we finished in football, and we never cared where we finished in libraries."

The Outsiders, a gritty story of rival gangs, by S.E. Hinton, was among my favorite books when I was in Junior High. I don't know how many times I read it, but I do know I had the opening paragraph memorized at one point, and that when my daughter read it for a school assignment last year I was able to help her with it without opening the book again myself. The film adaptation, directed by Frances Ford Coppola follows the story pretty accurately (although it leaves out a section at the end of the story) but I remember being disappointed in it when I watched it many years ago, and my mind was not changed by watching it again. I am not sure what it is that I didn't like about the movie. I was impressed that much of the scenery was so close to what I pictured in my mind's eye, indicating that Hinton must have described things very well, and that Coppola paid attention to what she wrote. I think the movie just didn't have the depth that the book did. The story takes place in Tulsa in what appears to be the late 1950s, although the book was first published in 1967 and it really could be set anywhere. The only indications in the movie that it is Oklahoma are an abandoned building with a company using Oklahoma as part of its name, and a shot of a black-and-white television set with a test pattern (remember those?) that says "First in Tusla".

There were no libraries in this movie, but this librarian, who likes to stay through credits, was rewarded for doing so with this golden egg:

"This film is dedicated to the people who first suggested that it be made...Librarian Jo Ellen Misakian and the students to Lone Star School in Fresno, California."


Although Oklahoma actually has an entire Official State Meal I did not have the ambition to prepare it. There are so many other state celebrations coming up and the holidays fast approaching. So picked my favorite thing from the state meal, cornbread, and made it. Cornbread should only be made in a cast iron skillet. Anyone who does differently is doing it wrong. Perhaps next year I will attempt the state meal.
Posted by YearofBooks at 5:46 AM