Indiana - home state of my mother and father. I don't even remember my first trip there, I was so young. My family used to drive there to visit my grandparents. It only took about 8 hours back in the 1960s to drive from Baltimore to the northwest corner of Indiana because the speed limit was 75 mph. I do know that Indiana was one of the first states I could identify on a United States map. When James and I lived in Ohio we could see Indiana from our porch. It was an hour earlier there, except during Daylight Savings Time, except some counties in Indiana did observe Daylight Savings Time. When we drove into the state we would try to check out the time on the bank clocks to determine where we were. I think Indiana has since given up and now observes Daylight Savings Time across the state.

A Very Indiana Christmas
Sometime in the late 80s I remember sitting in a bar in Oxford, Ohio, and being drawn to the silent television set in the corner where I saw a drunk-looking Santa and scared little kid, with a button nose, being pushed down a fake-snow covered slide. Even without the sound I knew I was onto something special. How could I find out the name of this Christamas movie? I had to see it. I don't remember how I eventually found out. I'm pretty sure I ran across the movie by chance again later. I don't recall going on any kind of a "quest" to find out. The movie, of course is that classic tale of Ralphie, the boy who wants a Red Rider BB gun - A Christmas Story. I have since seen the movie dozens of times. A few years ago I was excited to learn that the ficticious town of Holman, Indiana, in which the movie takes place, is really based on Hammond, Indiana, hometown of Jean Shepherd, the narrator of the story, and author of the book In God We Trust All Others Pay Cash, which the movie is based on. Hammond is also my mother's hometown! So how lucky is it that the Indiana anniversary falls in December so we can just have overselves a merry little Christmas fest all based in Hammond, Indiana.
Herewith my "A Christmas Story" stories:


Whenever we see the scene in which Flick gets his tongue stuck to the flagpole my family must hear, once again, about the time I tried to lick the frost off the top of an orange juice can when I was a little girl. I'll spare you the gory bits, and just say - Don't try this at home folks.
When my daughter was little whenever we would watch this movie and the famous F--- scene came up she used to beg me and my husband to tell her what he "really said". We knew that someday she would find out, but we weren't going to be the ones to tell her. Then one year she just didn't ask. Although we had never heard her say it, we knew that sometime in the previous 12-months she had found out what the f-bomb was. Good times. 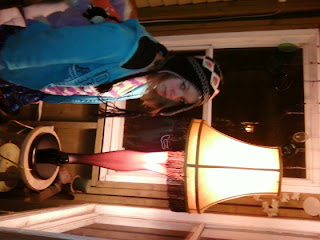 I bought this leg lamp from the "A Christmas Story" Gift shop online with Indiana Day in mind. Here Paloma stands next to it on her way to see her friend in West Bridgewater's Production of A Christmas Story. She was actually wearing a pink bunny hat, and changed when I pointed out how appropriate that was. I don't know why the picture is sideways. It is right side up in the computer file. I tried rotating it 90 degrees, but it flipped 180.

Since this week is lousy with State celebrations, a book that would be easy to read was what I was looking for in seeking an Indiana selection. I tried a search on Indiana Ficiton in my local public library catalog and was drawn to the title of a young adult novel:  Here Lies the Librarian. This story takes place in the summer of 1914 and tells the story of PeeWee McGrath, a recent 8th grade graduate who lives in a small Indiana town with her brother, and works with him in a garage. This book not only features four living, and one dead librarian, it celebrates librarianship and libraries, and  mentions Indianapolis (my father's hometown) Butler University (my father's alma mater) and Beanblossom, Indiana, which is not only home of Bill Monroe's Bluegrass Hall of Fame & Country Star Museum, it is named for one of my ancestors. My maternal grandmother's maiden name was Beanblossom (really!).

I chose Waynesboroughs as my Indiana meal because I thought the name was clever. These burrito wraps of egg, potato and sausage were filling, flavorful, and easy to make.
Posted by YearofBooks at 12:04 PM