Today's post is dedicated to my friend Anna, who grew up in Scranton. 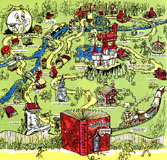 Fantasyland map
My first memories of Pennsylvania are of going outlet shopping in York and Reading. Only about an hour from our home in Catonsville, Maryland, we could drive up there after school and be home before bedtime. We also occasionally visited nearby Gettsysburg, especially after some of  our Maryland neighbors moved there. When I was very young my family loved going to Fantasyland, a now defunct theme park near Gettysburg. I went one time as a teenager and I very much wish I hadn't. I don't know if I had just become jaded, that the park wasn't being maintained properly anymore, or that I had simply outgrown it, or perhaps all three, but it seemed run down, and not nearly as fun as I remembered. My family also enjoyed HersheyPark, and my father and I stopped at the Leonard Harrison State Park a.k.a. the Grand Canyon of Pennsylvania on a trip up to Niagara Falls. Although Philadelphia is not far from where I grew up, I actually didn't make it there until after I moved to New England. James and I spent a night at a lovely B & B in Amish Country a few years ago. Our most recent visit was a stop in Pittsburgh on our way to visit family in Maryland, to see one of Paloma's camp friends.

So, I really think I was the wrong reader for Speaking of Miracles: The Faith Experience at the Basilica of the National Shrine of St. Ann in Scranton, Pennsylvania by Fr. Cassian J. Yuhaus. I chose it for two reasons, the first was that it was about Scranton, and the other was that it was short. The target audience of this one though is clearly failthful Catholics. In two instances it mentions abortion as the same level of disaster as Katrina, war, and AIDS. There is also a passage on marriage which states that "marriage takes place between one man and one woman as God intended. Not one man and eight women, not between one woman and five men. And today, one must note with emphasis, marriage is not between two men or between two women."  Yuhaus is clearly concerned about we here is liberal, and I might add, very Catholic, Massachusetts ruining the institution of marriage.

I did learn a bit about the history of Scranton from the book, and about the Catholic Church. It tells the history of the shrine, as well as relating stories from those who have experienced healing miracles after visiting the shrine and praying to St. Ann. Although I am not a follower of Catholism, I don't doubt the stories, and I do believe that prayer can help with healing. I have a very hard time believing, though, that there is any devine entity (God or Saint) who has the capacity to heal people, but will only do so when the faithful intervene through prayer, or that there is any one religion with a lock on it. This book was published in 2006, after the church's sex scandal broke. Since the book is a celebration I was surprised to see two references to the scandal. In one case it was in a letter which euphemistically mentioned the "priests who...[broke] their vows so long ago...a cross for all of us." Huh? Is the fact that priests broke their vows really what the problem is?

Anna suggested The Molly Maguires for today's cinematic fare, as the only movie she knew of that takes place in Scranton. She came over with her husband and daughter, and along with me, my husband and daughter we sat down to watch the film. I counted three people snoring before it was over (Anna was the first one out!). I don't think the movie was especially bad, just very slow moving. The first line of dialogue took place 15 minutes into the film. Prior to that there was a lot of mood-setting. We all agreed it was a bit hard to keep all the characters straight. It is about coal miners in the late 1800s and often we saw them with very sooty faces, and weren't quite sure which one was which. This movie was based on the true story of the Molly Maguires, coal miners who used terrorist tactics as a means of protesting their extremely poor working conditions. The Molly Maguires are infiltrated by a detective who seems to begin to understand their motivation, but ultimately rats them out.

I met Anna about 10 years ago. Ever since I've known her she has talked about making periogies whenever she visits her family in Pennsylvania. The only time I remember having periogies myself they came frozen from the grocery store, and were essentially tasteless. Anna and I made some from scratch - the Scranton way, and then both our families sat down to nosh. We also had keilbasa, another of Anna's PA favorites. The fresh periogies were delicious. We filled them with potatoes and cheese. I also recently learned from this article that periogies are one a favorite in Pittsburgh, too. http://www.nytimes.com/2010/11/17/dining/17region.html 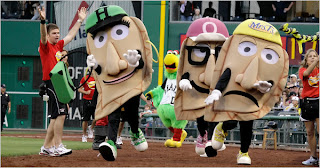