Mississippi is another one of my "drive through" states. The only time I was there was while I was in a car moving from Texas to Massachussetts during my third trimester of pregnancy. I honestly have no memory of it.

Sons of Mississippi by Paul Hendrickson 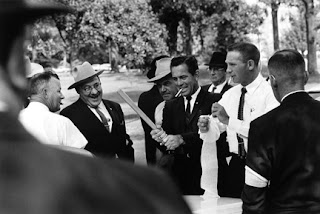 In Robert Persig's classic book Zen and the Art of Motorcycle Maintenance Persig relates a story about trying to get a student to learn to write. She claims there is nothing to say when assigned to write about Bozeman. He sends the student back to town and tells her to write about one building and to start with one brick in the building. The student returns exhuberent and excited about all there was to write about. Sons of Mississippi is a book is about one picture - a picture taken in Oxford, Mississippi in the fall of 1962, just before the University of Mississippi "Old Miss" was integrated by James Merideth. Meredith officially entered classes on October 1 of that year. The picture, dated September 27, 1962 - the day my sister was born - was taken a few days before rioting broke out on the campus. The men in the photograph are six sheriffs and a sheriff's deputy who want to maintain the segregated status quo of the south. Intrigued by this photograph, which was published in Life magazine, Hendrickson sets out to find the subjects and the photographer decades after it is published. Most of the sheriffs are dead, but he is able to set up interviews with the survivors, or their widows, or their offspring, as well as with Charles Moore, the photographer, and with James Merideth and his descendents. It is amazing how much can be written about one picture - a thousand words? This book is over 300 pages! I was fascinated that so many people were willing to open up to Hendrickson, including the former Grand Dragon of the Ku Klux Klan. I also never knew that James Merideth once worked for segregationist Jesse Helms and campaigned for David Duke when he made his run for governor. Libraries are mentioned occasionally throughout this book, beginning with the prologue in which Hendrickson describes another photograph, found on microfilm at the public library, of Ed Cothran, the sheriff with his back turned, when he helped recover the body of a Emmett Till a 14-year old boy who was lynched for making a pass at a white woman in 1955. There are a few mentions of the Ole Miss library including a description of the ceremony and reception that took place in 1997 when James Meredith turned over his papers to the university archives. What struck me the most, though was this passage about the university library :

"If a reseacher or pesky out-of-town vistor had gone through the [periodicals] aisles [of the library] looking for stories about what had happened at Ole Miss in late September and early October 1962, he would have discovered  that most of the stories weren't there. The periodicals themselves exist-but almost all of the stories have been scissored or ripped out. Whole issues are missing from the shelves, including the the issue of Life containing Charles Moore's photograph." Hendrickson makes no guesses as to the disposition of these relics.


Published in 2003, Sons of Mississippi was written before Old Miss retired its Rebel mascot and the mascot is mentioned as something that still ties the University to its "apartheid" past. Colonel Reb was retired recently in favor of the Black Bear mascot. Some fans are upset over the change, and are fighting it. See this story in the New York Times for details.

This book is made all the more fascinating after watching Prom Night in Mississippi a documentary about Charleston High School. Although the school has been integrated for decades, the school has always had two senior proms - a black prom and a white prom- sponsored by the parents. In 1997 actor Morgan Freeman, embarassed to be a resident of a town with such a traditon, offered to pay for the prom if it were integrated. His offer was ignored. In 2008 he made the offer again and the school made preparations to have its first integrated prom. Even so, a group of white parents sponsored a separate "whites only" senior
dance. Some of the white students attended both events, others attended only one or the other. The filmmakers interviewed many of the students, as well as some teachers and administrators who spoke quite frankly about racism. Students and administrators expressed quite a bit of concern about security at the integrated prom, even though the students had grown up together and played on sports teams together. Ironically, the only violence occured at the "whites only" prom. The parent organizers of the whites only dance refused to speak for the cameras. According to their lawyer they were afraid of being perceived as racist...hmm... Events that were not allowed to be filmed were described by narrators with drawings as visual aids. The drawings resembled comic book art, which seems to convey how ridiculous the idea of a segregated prom in the 21st century is. The School's only interracial couple was delighted to know that they would be able to attend prom together, even as the young woman's self-proclaimed red-neck father expressed his disapproval of the relationship.

I noted that the High School was not actually integrated until 16 years after Brown vs. the Board of Education and I wonder when Charleston will get around to complying with the any of the Supreme Court's decisions against prayer in public school. Two different scenes from the movie showed the School blatantly ignoring this rule on the separation of church and state.

Library connection
Some of the students were interviewed in the school's library. Books are visible in the background - tenuous I know, but all uses of a library will be noted in my blogs!

I was actually a bit skeptical that I would like Crispy Coated Cajun Fries, but the recipe seemed simple enough, which is what I was looking for in this season of States. I didn't follow the recipe exactly. It calls for corn meal and corn flour and I don't know what the difference between them is, so I just used corn meal, which was all I had anyway. And after my Nevada doughnut disaster I wasn't about to try deep frying again, so I just pan fried. These turned out pretty good. We had them with crab cakes and homebrew, which made a fine meal.
Posted by YearofBooks at 7:43 PM